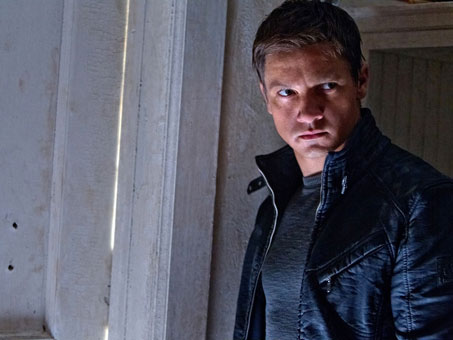 "Past is never dead. It's not even past." William Faulkner

Universal’s The Bourne Legacy has moved its release date back a week, from August 3 to August 10.

Мэтт Дэймон о:
"They were running the trailer a lot on the NBA finals so I saw that, but no I haven't seen anything. I'm sure it's going to be good. Renner's terrific, he's great and I really believe him in that world. I believe him in anything really. He's an awesome actor, and Tony (Gilroy's) a really super smart guy and a great writer and director and I'm sure he wouldn't have done it unless he had a really good idea and a way that he thought it could really work."
"I really want to do another one and I think Paul Greengrass does too, but I think it's the same question we've had after each one. If we really feel we can do it and that it will deserve to live with the other three that we did. If we can make one where we go into it feeling it can be even better than those, and it ends up being in that same ballpark, then we should do it. But If we can't, then we really should leave it alone."

Badass Digest:
Despite all of these misgivings, The Bourne Legacy represents a solid restart for the franchise. The ghost of Jason Bourne hangs all over the first half of the movie, so it seems obvious that Gilroy would like to bring Damon back, but even if he never returns Renner is more than capable of shouldering the burden. The film, while echoing The Bourne Identity, is adequate enough (not the highest praise, I know) and creates enough space for itself to warrant further adventures. I just wish that Gilroy hadn’t written the film with those further adventures in mind and had given us more closure.
ComingSoon.net:
An intriguing start to another possible franchise that's well on par with the original "Bourne Identity" in terms of ideas and storytelling. Although there isn't nearly as much action as the original three movies, it's doubtful anyone will leave "Legacy" not wanting to see more of Renner and Weisz in these roles.
IGN Movies:
If this had been the first film in a series – and could therefore be taken entirely on its own terms – The Bourne Legacy is an entertaining if at times uninvolving action picture, featuring sharper dialogue and better performances than most movies of the genre. But the film constantly reminds us that we are in both Jason Bourne’s universe and his timeline, with Cross following in his footsteps metaphorically and at times quite literally. It all makes for a frustrating viewing experience when you know that those films are superior to this one in every way, shape and form. The result is the fourth best entry in a series of four, and one that leaves you wishing the filmmakers had simply left Bourne’s legacy alone.
The Hollywood Reporter:
The Bourne legacy is furthered but not burnished by this fourth installment of the highly successful series that has heretofore been fronted by Matt Damon. With Jeremy Renner stepping in to play another covert operative and franchise screenwriter Tony Gilroy taking over the directorial reins from Paul Greengrass, the same tone and look are maintained, but the visceral excitement is muffled by familiarity, an insufficiently conceived lead character and the sheer weight of backstory and multiple layers of deception.
ScreenCrush:
The Damon films, while hardly masterpieces, had an existential edge to them. They were pure, propulsive, nightmare paranoia. This film has a dreamlike feeling to it, too – one of those frustrating dreams where you can’t quite make the pieces fit together logically. You kinda-sorta can hum along, but the specifics are jumbled. Nevertheless, ‘The Bourne Legacy,’ for all of its macro and micro faults, does have three or so truly nifty action sequences. I strongly endorse catching them out of context as you are flipping channels.
Variety:
Tony Gilroy takes over the helming duties with an overlong sequel that features too little action and an unnecessarily complicated plot. Fans will come, but they won't be happy, as if paying for a Bond movie and getting a 002 adventure in return.


"Past is never dead. It's not even past." William Faulkner

I havent got time for this mickey mouse bullshit